ZEE5 has announced its launch in the United States on June 22. The platform is currently under beta testing in the market.

The US is the final and largest launch for ZEE5, setting the stage for its rapid growth in a market with a ready 5.4 million diaspora audience that has a deep cultural and language connect to this content. 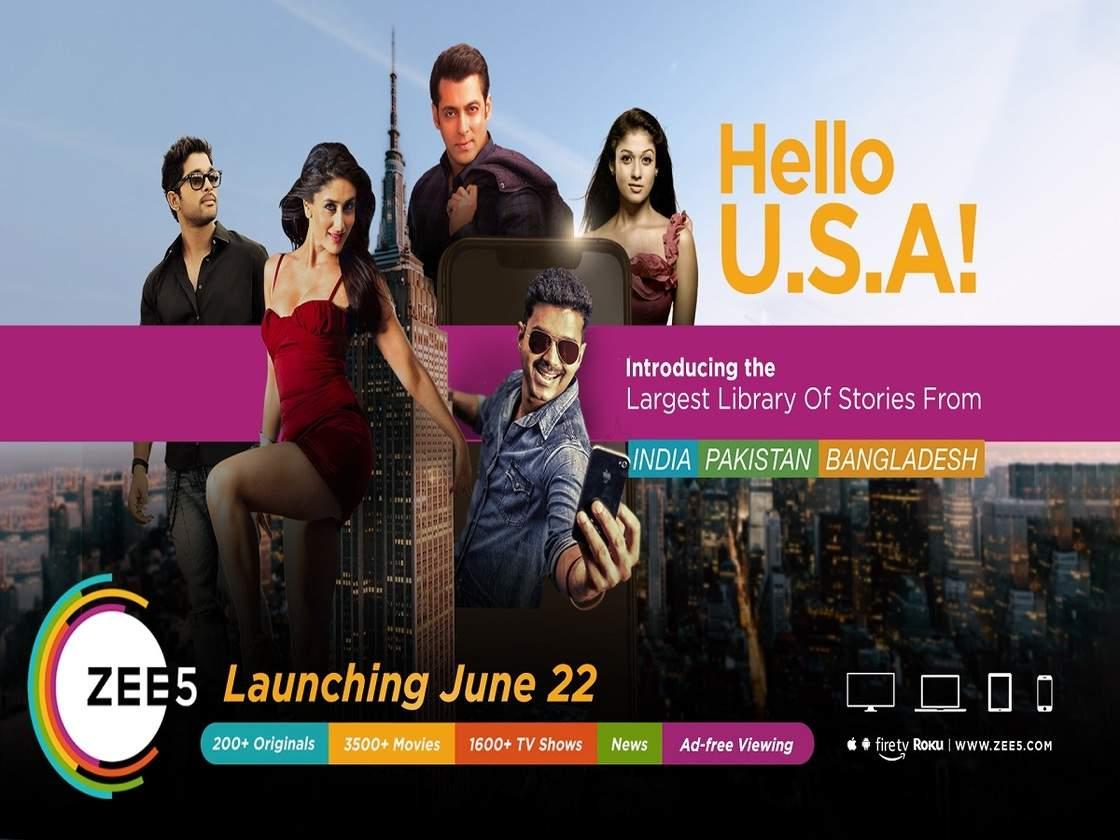 This direct-to-consumer service launch is especially significant at a time when Indians in the US, many of whom remain deeply connected to their roots, are unable to travel home.

ZEE5 will officially announce its launch in the US on 22nd June at a virtual event where its platform and content will be unveiled. The company will share key details about its plans for the market and its local partnerships, launch the brand campaign and more.

With this launch, the streaming platform will open up access to the largest catalogue of South Asian content ie, Indian, Pakistani and Bangladeshi content to diaspora and even mainstream content consumers in the US.

With 130,000 hours of content across 18 languages, ZEE5 will offer a premium, highly accessible, and affordable option for viewers to engage with the best of South Asian stories.

ZEE5’s catalogue aggregates classics as well as modern stories across the widest range of categories and genres.

· 200+ Originals - including The Final Call, Kaafir, Mentalhood, Churails, and more.

With “language of your comfort” being a key promise across Content, Navigation and even Voice Search, ZEE5’s content library is tailor-made for the diverse cultures and languages of Indian and South Asian communities in the U.S. The languages include Hindi, Bengali, Malayalam, Tamil, Telugu, Kannada, Marathi, Oriya, Bhojpuri, Gujarati, Punjabi, as well as Malay, Thai, Bahasa, Arabic, Urdu and Bangla (Bangladeshi). Key titles are also subtitled or dubbed in English.

“The United States represents our most significant market and the last bastion in our global journey as we launch an ad-free subscription service. As a Global Media Conglomerate, we have had a very deep connection with our diaspora audiences here, so it is a rather happy moment for me to now be bringing this audience the largest aggregation of South Asian content on a single platform through ZEE5,” said Amit Goenka, President, Digital Businesses & Platforms, ZEE Entertainment.

“The United States is home to millions of people whose families have strong connects with South Asia, and we are glad to bring them the largest and most diverse catalogue of culturally relevant entertainment across Indian, Pakistani and Bangladeshi stories. These stories have the power to engage deeply and go well beyond the South Asian audience to entertain and delight even mainstream audiences with their authenticity and allure. I am confident that ZEE5 will become the go to platform for all Americans who love great storytelling,” said Archana Anand, Chief Business Officer, ZEE5 Global.

· ZEE5’s Annual pack, priced at $84 USD will be available across all major devices at a limited launch offer price of $49.99.

· ZEE5 subscribers in the US will also be the first to stream Salman Khan’s Radhe: Your Most Wanted Bhai.

· Key initiatives and outreach plans to support the relief efforts for the fight against Covid-19 will also be shared at the launch event.

KFC ad cleared of scraping the bucket with ethnic stereotypes

Business on the Move, featuring Oddbox, Shutterfly and NHS Resolution

A briefing on the future of your B2B sales strategies

Webinar: How to activate your enterprise ABM to reach peak performance

Why brands need to design for human emotions