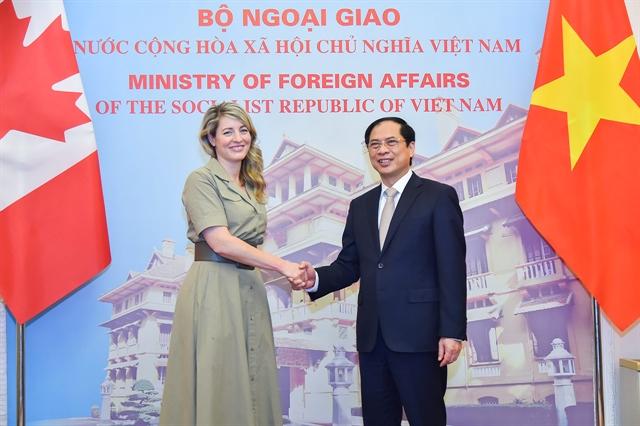 The meeting took place at the State Guest House, during which the two ministers spoke about the five-year comprehensive partnership between the countries, and planned the 50th anniversary of their diplomatic relationship in 2023.

Joly stressed that Canada highly values and looks forward to expanding relations with Việt Nam, especially economic and trade cooperation, and collaboration between businesses from the two countries.

She added that Canada will continue to support Việt Nam in responding to climate change, and actualise the commitments it made at the 2021 United Nations Climate Change Conference (COP26).

The two officials agreed that the relationship between the two countries is improving in multiple areas. Bilateral trade turnover reached more than US$6 billion last year, an increase of nearly 19 per cent compared to 2020, despite the difficulties and negative impacts of the COVID-19 pandemic.

Cooperation in development, education and training, and response to climate change and epidemics has also been strengthened, they said.

Foreign minister Sơn asked that more visits and exchanges would be organised at all levels and that the two countries would soon resume bilateral dialogue.

He also suggested the two sides make the most of the opportunities created from the Comprehensive and Progressive Agreement for Trans-Pacific Partnership (CTPPP), and asked Canada to expand its market for Vietnamese goods and agricultural produce.

The official also asked the Canadian government to soon approve Việt Nam’s vaccine passport, and support the Vietnamese diaspora in the country.

In addition, the foreign ministers spoke about regional and international issues of mutual interest. They agreed to strictly abide by international laws on matters related to the East Sea (internationally known as the South China Sea), which include the 1982 United Nations Convention on the Law of the Sea (UNCLOS).

They also agreed to continue to strengthen collaboration at regional and international multilateral forums such as the United Nations, APEC, ASEAN, and the Francophone community.

Regarding the issues in Ukraine, foreign minister Sơn emphasised the consistent policy of Việt Nam to settle international disputes with peaceful measures, which is grounded in the fundamental principles of the United Nations and international law.

Việt Nam calls for an immediate end to the act of using force, causing death and damage to civilians and essential infrastructure, and for the protection of civilians, including Vietnamese, in Ukraine, he said.

The country stands ready to make active contributions to humanitarian assistance, diplomatic processes, dialogue and negotiations, as well as reconstruction and rehabilitation processes in Ukraine, he added. VNS