Foreign investment inflows into Việt Nam during the first four months of the year saw a decline of 11.7 per cent year-on-year to around US$10.8 billion, a report from the Foreign Investment Department (FIA) has shown. 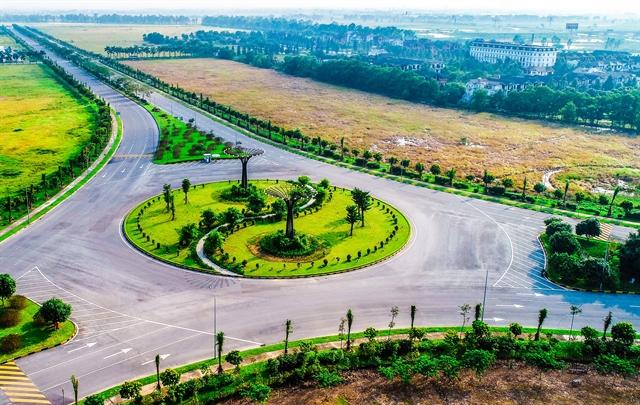 Among the large-scale projects in the four months was the Bắc Ninh Province-based Việt Nam-Singapore Industrial Park, which raised its capital by nearly $941 million. — Photo vsip.com.vn

Although a decrease of 56.3 per cent was seen in the newly-registered capital to nearly $3.7 billion, a respective surge of 92.5 per cent and 74 per cent was recorded in the investment injected into operating projects to nearly $5.29 billion, and capital contributions and share purchase deals to $1.83 billion.

In addition to LEGO's new project worth $1.32 billion, most large-scale projects were capital-added, baoquocte reported.

Among these projects were Bắc Ninh Province-based Việt Nam-Singapore Industrial Park, which raised its capital by nearly $941 million, and South Korean Samsung Electro-mechanics Vietnam Co., which added $920 million to its investment.

The online newspaper cited the FIA as saying that the projects contributed to boosting foreign investment capital. That also shows the confidence and expectations of foreign investors toward the Vietnamese market.

The FIA said the opening of international routes from March 15 would positively affect investment capital flows in the near future. Despite the negative effects of the pandemic, foreign investors still put their faith in the economy and investment environment of Việt Nam and made new investment decisions, and expanded their operating project investments.

According to the report, from January to April, disbursement of foreign direct investment (FDI) also grew positively by 7.6 per cent to $5.92 billion.

The processing and manufacturing sector lured the largest share of FDI with nearly $6.2 billion, accounting for 57.2 per cent of the total. The real estate sector came next with $2.8 billion or 26.1 per cent. The two sectors of wholesale and retail, and science and technology were the runner-ups with $667.8 million and $357.5 million, respectively.

Singapore led 72 countries and localities investing in Việt Nam with $3.1 billion, making up 28.8 per cent of the total FDI. It was followed by South Korea with $1.82 billion, equivalent to 17 per cent. Thanks to a new factory worth over $1.3 billion, Denmark ranked third with over $1.3 billion or 12.2 per cent.

Out of 44 localities receiving FDI, the southern province of Bình Dương took the lead with $2.35 billion, followed by northern Bắc Ninh Province with $1.57 billion and HCM City with nearly $1.28 billion.

According to the MPI, Vietnamese firms invested nearly $330 million abroad in the four months, down 40 per cent year-on-year. Of the sum, over $285 million was pumped into 34 new projects, doubling the same period last year.

Currently, there are 1,549 underway Vietnamese-financed projects overseas with a total investment of nearly $21.55 billion. The majority of their investments came in mining, accounting for 32.3 per cent of the total, and agro-forestry-fisheries sectors, equivalent to 15.8 per cent.