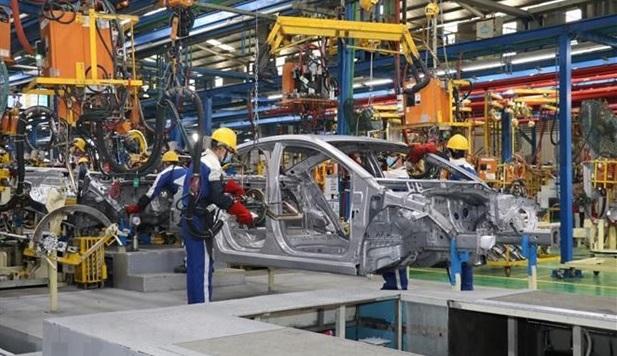 Labour productivity is projected to grow more than 6.5 per cent annually. — VNA/VNS Photo

Resolution No 54/NQ-CP sets the target of revamping the growth model and improving productivity, quality, competitiveness, self-reliance, adaptation and resilience of the national economy.

Accordingly, labour productivity is projected to grow more than 6.5 per cent annually, and the gap of national competitiveness with ASEAN-4 (Indonesia, Malaysia, Philippines, and Thailand) will be narrowed by 2025, especially in terms of institutions, infrastructure and human resources.

Spending on scientific research and technological development will be no less than one per cent of GDP, and the number of enterprises engaging in tech reform should increase by 15 per cent each year during the 2021-25 period.

The country strives to have some 1.5 million enterprises, of which 60,000-70,000 are medium and large-sized firms. The private economic sector is expected to contribute around 55 per cent of GDP. At least five national products are projected to win international brands.

Among 35,000 co-operatives set by the end of 2025, more than 3,000 will utilise high technology in production and consumption, and 50 per cent of agricultural cooperatives set up connectivity with businesses in value chains.

To fulfill the targets, the resolution specifies major tasks and solutions, with the first group of tasks focusing on restructuring public investment, State budget, credit organisations and public non-business units.

For public investment restructuring, the Government has assigned the Ministry of Planning and Investment to coordinate with ministries, agencies and localities to outline measures to raise the quality of institutions on public investment management and improve the economy's capacity of absorbing investment.

The Government also plans to build policies and solutions to push ahead with decentralisation, promote the responsibility of agencies and their leaders, and address obstacles to public investment management.

Meanwhile, the Ministry of Finance and other ministries and agencies will work on a project on reforming mechanisms for State budget management and allocation, which will be submitted to competent agencies for approval, along with other relevant policies.

The State Bank of Việt Nam (SBV) will coordinate with ministries, agencies and localities to consolidate institutions in monetary, credit and banking sectors, making them match market principles and operate in a healthy and stable fashion.

The project on restructuring credit institutions and handling bad debts for 2021-25 should be submitted to the Prime Minister for issuance this year.

Another group of tasks set in the resolution is to develop the financial, land and labour markets, and improve the efficiency of the allocation and use of human resources. A financial strategy by 2030 will be developed and sent to the PM for issuance this year.

The Ministry of Natural Resources and Development will take the main responsibility for building a draft law amending and supplementing some articles of the 2013 Land Law and making a report to the Government before the document is submitted to the NA for adoption this year.

The third group of tasks target corporate development, connectivity between enterprises of different economic sectors, and the reform and development of the collective economy and cooperatives.

The resolution also highlighted the tasks of urban economic development, regional connectivity and the restructuring of sectors towards modernity and green, sustainable growth. — VNS

Russia is restricting social media. Here's what we know