Oatly faces a storm in a teacup after its links to controversial private equity investor firm Blackstone drew ire on Twitter this week, with activists declaring the brand ‘cancelled‘. However, Tom Sussman, head of planning at Leo Burnett, says that if the brand plays its cards fright there’s a good chance this cloud will pass and reveal a brighter future. 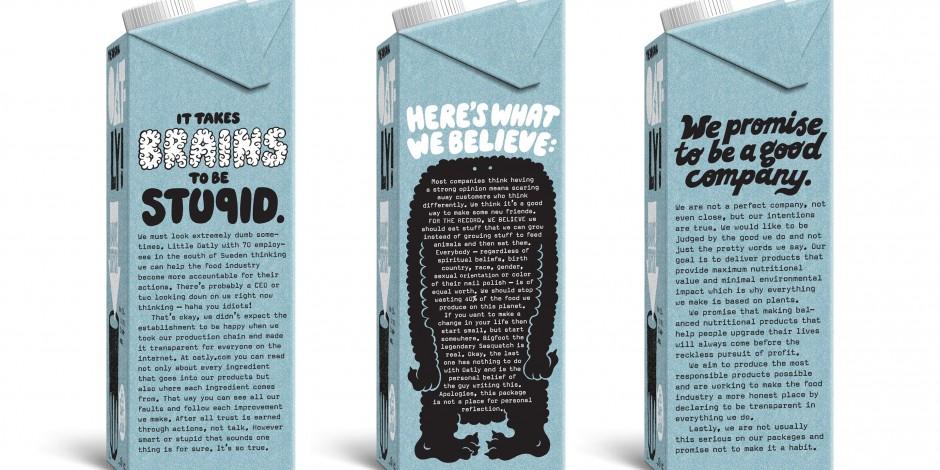 Oatly, the $2bn Swedish oat drink company, felt the sharp tongue of the internet this week.

However, among this list, there was also another slightly less shiny name: the Blackstone Group.

This is where things began to sour.

Blackstone, on the surface of things, is a private equity firm like almost any other. However, the company has recently suffered reports of links between its C-suite and Brazilian rainforest destruction (courtesy of infrastructure company, Hidrovias do Brasil). Attention has also been drawn to a $3.7m personal donation made on behalf of its chief executive Stephen Schwarzman to Donald Trump’s 2020 re-election campaign.

None of which looks particularly good on a brand positioned as the ‘good guy‘ of the already impeccably virtuous alternative milk category.

Twitter users, as you might imagine, were not best pleased. In fact, former Oatly devotees have been queuing up all week to call the brand a ‘lie‘, ‘disgusting‘ and declaring it ‘cancelled‘.

So, Oatly is cancelled?

In today’s world, when a brand is described as ‘cancelled‘ it is generally accepted that the consequences will be both disastrous and final.

Once it‘s reached Twitter the discussion is over, the judgement is in: that brand, company, or industry is finished and may as well go home.

However, as seductive as that simple and deliciously gossipy idea has become, recent history has also proven it untrue.

Need proof? Just look at some of cancel culture‘s most prized trophy kills: from the past two years: Chipotle (#boycotted over its working conditions), Facebook (too many cancellations to mention, but more recently these have centered around its hate speech policies) and Amazon (most recently for advertising the position of ‘union spies‘). Despite all of three being pronounced dead at the scene of their crimes, none of these organisations are in any real way finished.

Chipotle’s share price has enjoyed an almost entirely uninterrupted upward trajectory for over two years; Facebook currently trades at an all-time record price of $302 a share; and Amazon has been newly-crowned the biggest and most powerful business on the internet.

Not bad, for three brands Twitter is convinced it killed years ago.

So, contrary to popular opinion, being ‘cancelled‘ does not mean game over. Oatly should breathe slightly easier.

However, this is not to say that it cannot be potentially harmful. To assess the potential extent and depth of this harm to Oatly, we now need to ask just one other question

With brands, as in life, the weight of an insult is always directly dependent on the person that is hurling it at you.

In other words, if the audience that is proclaiming you ‘cancelled‘ does not represent your present or future source of growth, then you might not have as much reason to worry as you initially thought.

And – contrary to popular belief – this actually seems to be the situation that Oatly finds itself in.

Those proclaiming the cancellation of the Oatly brand and asking for its boycott are doing so on ethical grounds - out of concern for the environment and the radical right-wing politics of America’s reigning orange-in-chief.

However, whilst these anxieties are undoubtedly valid and typical of the brand’s early adopter audience, they are now unlikely to characterise the primary purchase concerns of the brand’s current and future sources of growth.

In short, like it or not, Oatly is now bigger than this.

The numbers already point to a brand that has already crossed over to the mainstream and is currently enjoying huge success among new early majority and late majority audiences.

To put it in perspective, Mintel claim that, in 2019, 23% of British shoppers were already drinking plant-based milk alternatives, with Oatly the most high-profile among these.

And what’s driving all this purchasing among mainstream shoppers? Well, sadly, it’s not morality. Mintel confirm that the chief purchase driver among this newly alternative-milk-obsessed mainstream audience… is personal health.

With all of this in mind it feels fairly safe to assume that – despite headlines to the contrary – Oatly can actually still emerge pretty much unscathed from the current drama.

The only real question left to answer is: how can this brand now transcend the alt-milk niche, and actually go on to dominate the entire milk category?

I’d better put the kettle on…

Oppo launches new look for summer with its Famous for Flavour, not Calories campaign

Why was the founder and owner of Hong Kong’s Apple Daily arrested?

The cookie crumbles: why it's time to redefine your data strategy

Panasonic turn Grab cars into experimental showrooms for its products