After a year long absence from the UK, Grolsch is back. Asahi International’s Paul Cornell talks The Drum through a relaunch built by teams from Wunderman Thompson and Outlaw – and without a single in-person meeting. 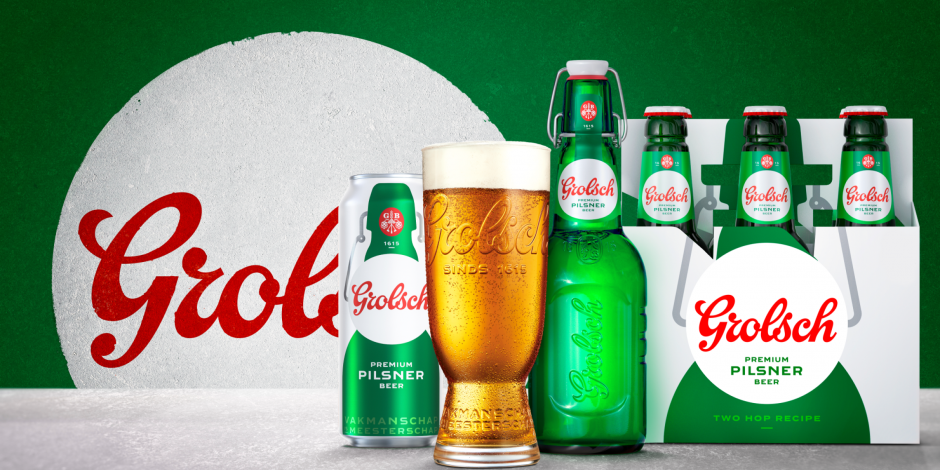 Dutch beer Grolsch has announced its UK return with a £3m marketing campaign, new packaging and branding, as well as the return of its unique swing-top lid bottles.

The once-beloved brand is adjusting to increased demand for premium and ‘craft’-style beers.

Cornell said: “In its heyday around 2008, Grolsch was probably one of the leading international premium beers. You'll remember some of the ads and iconic packaging - but support for the brand reduced aggressively in the last decade.”

That decade has kept the brand on the move. It was sold to SABMiller group in March 2008, and was then moved to Asahi under the eye of regulators when Anheuser-Busch InBev swallowed SABMiller in 2016. And although it is available in over 60 markets worldwide, in 2019 it left the UK market after a brewing deal with Molson Coors expired.

For a brand founded in 1615, a lot of its complications have come recently. Brewed in Enschede, Netherlands, it primarily competes with Amsterdam-based Amstel and Heineken.

“We’re from the country, and then you’ve got Heineken from the city,” says Cornell. Internationally, Grolsch enjoys growth in its top markets Russia, Canada and Argentina. “We just need Australia to get all four points of the world”.

Despite ambitions of global conquest, Cornell’s eye has turned to the UK for a huge relaunch with a multimillion pound budget behind it.

He said: “We know that the first stage in relaunching a product is to reassert our core liquid credentials and our functional credentials in a sticky, memorable way. We’ve done that with the ‘Double-brewed, for double the flavour’ tagline. Obviously it means nothing. But it also means everything.”

This serves as shorthand to detail how it packs two types of Dutch malt, and Enschede Dutch spring water, into its brew. It then runs some of the liquid through the flavoursome mash for a second time. The message hints at the lengthier process and greater taste – key to seeking out premium pilsner buyers.

“Over the last three or four years, Amstel has been able to come in [to the UK] and make a really good fist of things. It has started to rejuvenate the category. We feel we can go in there now and deliver the 4%.”

The 4% ABV has been growing fastest in the premium category, according to Grolsch.

Taste not, want not

The taste tests (“a hit”) luckily finished two days before the UK entered lockdown. Since then, Cornell and Asahi have been working with agency partners remotely. “I’m quite new to the company as well. I’ve never seen the legs of half the people I’ve been working with,” he says. Meanwhile, UK managing director Tim Clay has been masterminding the launch from a campervan in his yard.

The branding was modernized by brand design agency Outlaw. With a polished logotype inspired by hand-drawn signs, one of the brand’s earliest advertising lines, ‘Vakmanschap is meesterschap’ (’Craftsmanship is mastery’) appears on the packaging. With competition on supermarket shelves more important that ever (especially with a question mark hanging over the future of many pubs), extra consideration went into the packaging.

Meanwhile, Wunderman Thompson UK queued up social media from October 2020 and on video-on-demand (VoD), social and digital out-of-home (DOOH) from the second quarter of 2021.

“The first part of the campaign as we build distribution is to use social and digital to ensure that we're really landing that message with the consumers who are most likely to purchase my within their geographical space.”

Once it ups awareness and distribution, expect to see it on TV as “one of biggest spenders within the international premium category”.

Sampling is vital to any beer launch and with a premiumization effort, the proof is in the pudding – or rather, the pint. If the pilsner tastes better, Grolsch need to prove it.

Unfortunately, Covid-19 has curbed any mass tasting efforts in public spaces. And even on-trade revenue is threatened by further lockdowns.

Thankfully, the Grolsch brand has some legs. “From our research, we know there is a low barrier to entry. When people see it, they give it a go. It’ll be £2.50 a half and £4.50 a pint which isn’t huge. In this new reality, we have to really leverage that 87% awareness.

“We’d love to have done more sampling in the off-trade, or in the events space, festivals or arenas but in a post-coronavirus world that's just not possible.”

Down the line, expect to see digital coupons on social media offering heavily discounted trials of the brew – perhaps during hot weather or bank holidays – whenever it is calculated to land hardest.

And for its £3m spend in the first year, it expects a 20% share of voice in its competitor set. Cornell concludes: “The ambition is that in three years’ time, Grolsch will be a top 10 international premium brand in the UK.”

It is tapping into a wider trend to push premium credentials as consumers look to be drinking less, and drinking better.

From the Danes, you may remember Carlsberg’s bold relaunch of its new brew – with a new premium line last year. That, of course, required the brewer to play with the idea that what it was selling previously wasn’t so good. Grolsch will hope that thirsty Brits won‘t need their perceptions deconstructed before they re-embrace its charms.

Entertainment and media industry revenues to slump 6.7% in 2020

Email marketing isn’t working – what’s a B2B marketer to do?