Lazada has rebranded for the first time in five years and launched a major campaign, which it hopes will humanise its brand around positive, life improvement messages. 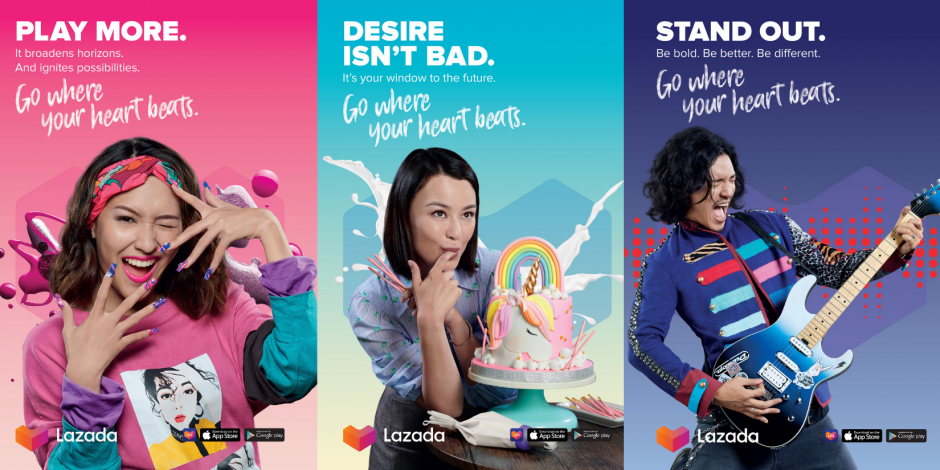 Lazada rebrands for the first time in five years

The rebrand and campaign focus on the insight that Lazada, as an e-commerce brand, betters lives by allowing people to follow their passions and access goods that can fuel their dreams. It ties into a wider vision from Lazada to “accelerate South East Asia progress through commerce and technology”.

Speaking to The Drum, Lazada group chief marketing officer, Mary Zhou, says the brand wanted to be more in tune with the energy and positivity of its home market of South East Asia and that its old brand didn’t do the business justice, after years of major changes.

“Within five years' time, we have seen a lot of changes in this region in all six countries that we operate. People are not just purely pursuing products but I think people in Southeast Asia are really very positive and passionate about their future," she explains.

"So they are seeking different lifestyles, which they would like to experience and we can help deliver. That's why we felt very strongly, ever since last year, that it's time for us to also update ourselves to try to cope with or lead some of those changes."

The campaign calls on people to ‘go where your heart beats’ and tells stories about three different characters that have used Lazada to buy items that have led to major, positive life changes.

The campaign consists of a long-form video that tells three stories; an entrepreneurial mum who turns to her passion of baking, a 9-5 worker that realises his dream of being a rockstar and a young girl who builds a creative career in nail art after being inspired by content on live streaming. The long-form ad will be shown in cinemas, while shorter versions of each story will also be shown online and on TV. Print, OOH and digital ads will also tell the story of the three characters.

The rebrand introduces a new heart logomark, which features heavily across the new brand campaign and will appear across packaging, the website and app from today.

The heart has been introduced to allow for a younger, more colourful look to the business, and when turned it also looks like the letter ‘L’ for Lazada.

“The reason we started with the ‘heart gram’ was that, firstly, our internal designers found out that somehow it is a little bit close to our L, our first letter. So it is coming from somewhere but we do also feel that we want to be closer to the heartbeat, or the desires, or the love and also all the emotions of the people in South East Asia, not only the mature, transactional side We do think of Lazada a local company, for which we want to get closer to people's lifestyle,” says Zhou.

The rebrand and the simplified logo have been in the works for a little while and are very closely tied to other major moves by Lazada over the past years. Lazada has slowly been taking investment from Alibaba, which now owns the brand, and has been introducing technology, talent and features to the business.

It’s borrowed some key Alibaba e-commerce features, including the introduction of LazMall and livestreaming, which it debuted via a Dua Lipa concert for its birthday earlier this year.

Zhou explains that the business has been working hard to balance the introduction of Alibaba’s technology with the local insights about what people in South East Asia want.

“I think people's lives have evolved into the stage where they want to have a simplified and more entertaining, more convenient, life. Powered by the technology from Alibaba and by getting the local understanding and the insight, we can combine these two parts fairly well," she says.

"The entertaining part and also the technology part. In that case of live streaming, we feel that we are not competing with any content providers because we are a platform, we are an ecosystem-enabler, we just want to bring different parties to try to make this format more diversified, more agile. So actually there are more possibilities we can explore all together,”

The logotype of the heart was actually introduced publicly during one of Lazada’s seasonal sales last year, where brands were invited to use the heart shape and customise it to help promote their deals on Lazada for the sale. Zhou explains that while the focus for the rebrand now was to make sure customers get used to the new positioning, the aim is to work with brands on using it in the future.

“I believe that this is a long-term partnership that we want to build between brands and quality sellers with Lazada. The reason we reintroduce this heart gram is that we somehow feel that it's very universal and that it can work well with everyone, every customer and every brand," she says.

"In the long run, we want to work closely with brands in exploring more opportunities and the possibilities of how this heart gram can work together jointly. But for this particular time, we want to first start with letting people know who we are and where we want to go, where we want to be,”

The rebrand was carried out in conjunction with Superunion, with the brand campaign by Wunderman Thompson.